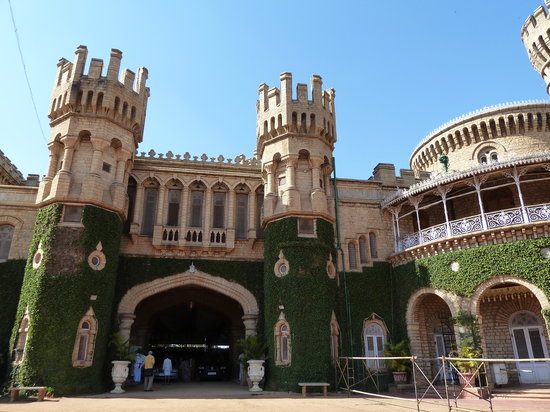 With beautiful lakes and exotic parks to historic forts and museums, Bangalore has a lot to whet your appetite with. Visit to experience!

The best time to visit Bangalore is from September to February. There are non-stop Chandigarh to Bangalore flights available and it takes you just 3 hours to reach Bangalore!

Better known as the ‘Silicon Valley of India’, Bangalore is a rich mix of modernity and tradition. There are numerous tourist attractions to explore and enjoy an unforgettable experience.

Bangalore Palace is one of the top places to visit and dates back to 1887. It has drawn inspiration from the Windsor Castle and is reminiscent of Tudor architecture. There are fortified towers, arches, lush green lawns and ornate wood carvings in the interiors. Members of the royal family still reside here. One will be awestruck by the collection of memorabilia, family photographs and portraits. The timings of the palace are from 10 am to 5:30 pm. The entry fee for Indians is Rs. 230 and for foreigners is Rs. 460. There is a fee of Rs. 675 if you want to take your camera. Take the cheapest flights from Chandigarh to Bangalore and this palace is just 52 minutes from Bangalore airport.

This gallery located on Palace Road was opened in 2009, and only two other galleries of this kind are found in Delhi and Mumbai. It is a colonial mansion with a garden, and there are two wings which are interconnected. While the old wing boasts of works dating back to the early 18th century until India’s independence, the new wing has a collection of modern and contemporary artists. You could sip your favourite brew at the café located on the premises. The gallery is open on all days between 10 am and 5 pm except for Mondays. The entry fee for Indians is Rs. 20 and for foreigners it is Rs. 500. Photography is strictly prohibited inside.

The palace is located inside the fort. The style of construction is Indo-Islamic architecture. Tipu Sultan’s neutral outlook towards religion finds expression in the Hindu temple inside the courtyard. The entry fee is Rs. 15 for Indians and Rs. 200 for foreigners. The Krishna Rajendra market is in close proximity to this palace.

Be prepared to be greeted by a riot of colours with a myriad of flowers of different hues. The best time to visit this market would be early morning as this is when the fresh stock of flowers arrives. You will also find a variety of fresh produce, spices and copper articles.

This sprawling Mughal-style garden was originally the exclusive preserve of the city’s royalty. The credit for this garden goes to Hyder Ali and it was later expanded by his son Tipu Sultan. The red roses that bloom all year round give the garden its name. The garden is home to the widest array of plants in the world. The iconic glass house inside the park was built to commemorate the visit of the Prince of Wales in 1889 and its design was inspired by the Crystal Palace in London. You can visit the garden from 6 am to 7 pm all year round. You must visit the garden during the Independence Day and Republic Day celebrations when it wears a festive look with a flower show displaying over 200 varieties of flowers.

A landmark tourist attraction, Cubbon park is located in Bangalore’s business district. It is a haven for joggers, nature lovers and anyone who wants to get away from the hustle and bustle of the city. There is a wide variety of decorative and exotic flowering trees in this garden. The Bal Bhavan play area and aquarium are popular among children.

This majestic building can be found next to Cubbon Park. The style of architecture is neo-Dravidian with four domes at the four corners. It is home to the Chamber of Karnataka Government and many other government departments.

Built in 1867 by Tipu Sultan, this majestic architectural red, two-storied masterpiece has a neoclassical style. It is home to the High Court and numerous lower courts. It is located opposite Vidana Soudha near the entrance of Cubbon Park.

This breathtaking lake spans 125 acres in the heart of Bangalore, north of M.G. Road. It is open daily from 6 am to 8 pm. For lovers of boating, the Karnataka State Tourism Development Corporation has facilities for boating.

The exciting city of Bangalore is waiting to be explored, so just go online and book the cheapest flights from Chandigarh to Bangalore!